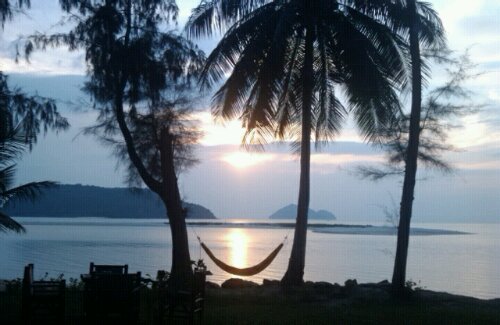 It’s been a busy two days of driving around on our scooters and checking out stuff around the island. Of course, going with the trend so far, something had to go wrong.
Today a swarm of some insects (that I wasn’t going to try identify since I was fleeing for my life) attacked me when I stopped on the side of the road to take some photos.
I ended up getting stung twice and to say it was painful is a major understatement. It wasn’t long before that subsided and I was fine though, after Alex managed to pull out the, almost centimetre long, stingers that is.
We did manage to cruise around almost the whole island, except the east side which we couldn’t fit in with everything else. We also managed to see Phaeng Waterfall and got to the viewpoint on top of the hill, before a big tour group started coming up, which was really cool, although the cloudy day spoiled it only a bit.
We also scouted the Haad Rin beach a bit before we pitch up for tomorrow’s New Years Full Moon Party.
On the plus side, we did manage to locate the location of the Half-moon Festival and find the lost room key which is always good…

This entry was posted on December 30, 2010 by DonCharlieV. It was filed under CharlieV the Traveller, Travel and was tagged with pain, scooters, waterfall.