Just over a month back, I blogged about the Woolworths racism saga and how I felt that we can’t blame Woolworths for the BEE policies they need to follow. 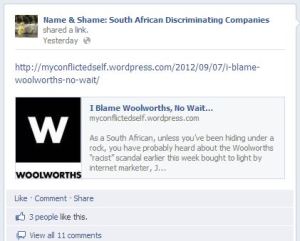 Yesterday a Facebook group, which I happen to follow, shared my blogpost on their page and I happened to come across it this morning. There were also some comments on the original post, which I replied to, but there are some comments from the facebook post that I wish to address.

Before I begin, let me just state three things:

Now as for the comments, Let me address each one individually:

I don’t even know where to start with this comment. The grammar and punctuation alone get me tingling, and not in a good way.

You want to protest, fine, but a quiet boycott by maybe a few thousand white people is barely a start, it’s almost insignificant.

Dear Melanie, thank you for your condolences, but they are however unnecessary and unwanted. From your comment I could assume that you are a narrow-minded fascist bigot, but I cannot know that, so I won’t call you that. The Moral? Don’t make assumptions, simple. In response: If I were brainless, I would not have an opinion, even if it is different to yours. Pinko? I am hardly sympathetic to our socialist government, apathetic maybe, but not sympathetic. My time is spent better on other things. As for Liberal, yes possibly, I consider myself very open minded, so I’ll give you that one…

Hardly… From the end of August, after an initial drop of R400 which was at its lowest on the 10th of September, it has now gone R200 beyond what it was at the end of August (http://www.bloomberg.com/quote/WHL:SJ)

No-one ever said that life was easy. I don’t agree with what Woolworths did, and never will, but I do think peoples reactions and consequent reactions are misdirected.

I agreed with you until your last sentence. “Whities” are definitely too lazy when it comes to standing up for what is right. And when they do something it is generally something insignificant. Like saying you’ll never shop at Woolies…

Oh Lord, again with grammar and punctuation… Asskissing, uncomfortable? Hardly, and as for liberal, like I said, possibly, because I do consider myself open minded. 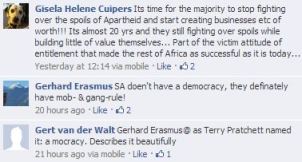 I thought I’d group these together, since they’re the only comments I agree with.

The majority definitely love the victim mentality and until everyone stops blaming one another, there is no hope for us as a country.

Mockracy is definitely the right description.

As a South African, unless you’ve been hiding under a rock, you have probably heard about the Woolworths “racist” scandal earlier this week bought to light by internet marketer, Justin Harrison, who followed up a  few days later with another post. No surprise it made news, after all didn’t SAA just go through the same saga?

If you are still not sure what I am going on about here are some links to what is happening:

Whites against Woolworths: doth they protest too much?

While as a white South African male, my initial reaction was to throw my arms in the air and scream bloody murder, as many did, after reading some alternative views and letting the dust settle, I find that I can’t really blame them at all.

So who do we blame? The ANC? Aren’t they are just trying to correct the imbalances of the apartheid era, the imbalance which has still not been corrected, despite close to 20 years of being free of apartheid? Well that is debatable since their policies have only seemed to benefit a very small majority of their followers, but that is something else altogether.

So do we blame white people? Can we blame the children of the post-apartheid era, like myself, who were too young to know what was happening? So do we blame our parents? After all they did nothing while the National Party ruled the country and implemented apartheid policies. They should have put their lives on the line, they should have done more, right? While it went on for far too long, the entire world also did nothing really, so can we blame them?

Maybe we should blame the Germans and countless other supremist goverments for giving our apartheid government ideas? Or maybe we should blame the Dutch and/or British settlers for coming to this country and taking it away from the indigenous people, the Zulus, the Xhosa, the San, et al? Not really, much like the Romans did for them, they bought a little bit of civilisation to the region.

Maybe we should blame the Romans for bringing the first hints of civilisation to what is now Britain & Netherlands or the Celtic or Germanic tribes for settling there in the first place? No?

What I’m trying to say is that history is exactly that, history. If we are going to just try to point fingers and play the blame game, nothing constructive will come of it, people will get angry and say stupid things which will piss off other people who will say more stupid things.

Lets say, hypothetically, as a white male in SA, you were looking through a newspaper for a job and you saw a job that you wanted to apply for. At the end it tells you, preference is given to BEE candidates or to disabled black women. Of course you think to yourself, “Fuck I hate this BEE crap!” or whatever else you may think, but is your next step to now launch a boycott against this company, or do you move on and try again?

The only thing that Woolworths did wrong was the way that they worded their job post really, and of course the way they handled the PR nightmare they bought on themselves, but I think after initially going into a flat spin, they have managed to correct their mistake, and isn’t that what we wanted?

Personally, I went to Woolies yesterday and bought some chicken they had on special. And next time I feel like some smoked snoek pate, I will go again.