Which Smart-phone is King?

Article first published as Which Smart-phone is King? on Technorati.

For months before I upgrade my mobile phone, I will sit and research all the current phones and phones due for release. Firstly, there is no doubt that it will be a smart-phone. According to Gartner, smart-phones accounted for 23.6% of all mobile phones sales in the first quarter of 2011, an increase of 85.6% year-on-year. Then it comes down to which of the major smart-phone OSes you support: Android, iOS, Blackberry OS, Windows Mobile, Palm or Symbian?

In the last two years or so, a lot has changed in the world of smart-phones as can be seen by the data available from Comscore and Gartner. If you analyse worldwide smart-phone sales from 2009 to present, things are very interesting indeed. In the days before Cupcake (version 1.5) and Donut (version 1.6), when the only Android phone was the HTC Dream (G1), in the first quarter of 2009, Android only had 1.6% of the world smart-phone market. By quarter one, a year later, in 2010, they were close to 10%, and had climbed above Microsoft and all the other OSes. Symbian, iOS and RIM were still the dominant players though. At this stage, Android phones coming out were on the Eclair (version 2.1) release of their OS and Froyo (2.2) was expected by quarter two of 2010. The only significant jump for the iOS was in quarter three of 2009 shortly after version 3.x of it’s OS was released in June 2009. By quarter three of 2010 though, there were two major changes visible in the sales of mobile phones, as both Android and iOS jumping above RIM and Android showing them both the way of things to come by jumping to the second spot, a massive 15.9% climb over 6 months. By the first quarter of this year, Android would be on it’s latest versions of OS, Gingerbread (version 2.3) for mobile phones and Honeycomb (3.0) for tablet devices.

Things aren’t much different if we look at the US smart-phone OS market. For some reason Comscore, who supply the data, don’t seem to consider Symbian to a smart-phone, not that I completely disagree, especially since Nokia have started going to Microsoft for their OS and Sony-Ericcson have been using Android for a while now on their smart-phones, but it would have been interesting to see nonetheless. Shortly after the first Android phones hit the market in 2009, the Android OS only had a market share of 2.5%. RIM was smiling with a market share of over 40%. I’m pretty sure they had no idea how things would change. Fast forward to May 2010 and Android had overtaken (or almost) the previous number three, Microsoft, and number four, Palm, who were losing market share quite consistently. They weren’t the only ones affected either, while Apple were idling along at around the 25% mark, RIM were just starting to lose grip. The trend continued for Android until sometime around November last year, when they overtook Apple for second place. By January this year, Microsoft and Palm were choking on their competitor’s fumes at 8% and 3.2% respectively. More importantly though, in less than two years, Android had grown to the point where it was the number one smart-phone OS in the US. I’m not the biggest fan of Blackberry or Symbian phones admittedly, so it’s no big loss, but with Android and Apple controlling close to two thirds of the smart-phone market in the US and dominating smart-phone sales worldwide (close to 60%), it’s going to take something drastic to change the way things are currently going. Maybe Nokia’s move from their now-archaic Symbian OS to the Windows 7 phone OS could do that? But then what about the rumours of the new iPhone 5/4S or even talk of the iPhone 6. You also cant ignore the fact that all-unifying version 4 of Android’s OS due out by the end of the year.

One of Androids flaws as an open OS, is fragmentation. Manufacturers and operators, even those in the Open Handset Alliance, have, to be honest here, not kept the various phones out there properly up to date. In the case of the iPhone, each time a new version of iOS is released, you can upgrade most of the older iPhones to a newer version. In the case of iOS 5, previewed for developers in June 2011, if you own a iPhone 3GS, iPhone 4, 3rd or 4th gen iPod or an iPad 1 or 2, you will be able to upgrade to the new version and that is all there is to it; one standard version with standard features across most devices still in use. If you have a HTC Dream (G1) or Hero (especially the GSm version), chances are you have some sorted of custom ROM on a “rooted” phone instead of an official update, which aren’t happening anymore. This is partly because the only option to keep your version of Android properly up to date is to “root” your phone and install a custom ROM, a modified version of the Android OS, which are community developed to give the option to those of us whose manufacturers don’t or never did release updates, to be able to enjoy the features of the newer versions. Why would you do this and aren’t there risks doing this? Read this guide for a better idea about rooting.

This will all hopefully change with Ice Cream Sandwich, version 4 of the Android OS. This is the version of Android that will hopefully standardise Android a bit. It won’t just be for phones either, the new version will work for tablets and computers as well. They have basically adapted the framework and by adding APIs will help developers optimize it for all various devices. The two most significant changes for me though so far are the following:

Check this article or this one for more info on Ice Cream Sandwich. 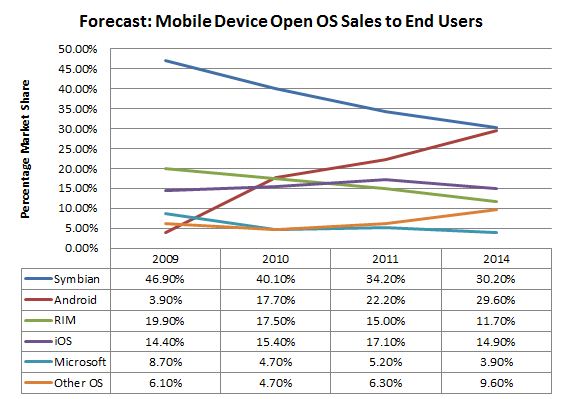 It is still too early to choose the king of the smart-phones, it is still an extremely volatile market and it would be cocky for me to say that while the Android is currently dominating that it will in a year’s time, one only needs to look at RIM, in the US, or Symbian on a more global level, a couple of years back to know the top spot is highly sought after and us consumers are hard to please when it comes to our “whole-lives-in-our-pocket” smart-phones. If we are to believe Gartner, by 2014, Android will be close to Symbian on not only smart-phone sales, which if you recall now make up 23.6% of smart-phone sales, but of all mobile devices. I’m not completely convinced, but a geek can dream.

Authors note: This was my first article published on another website excluding my own blog and I’m quiet proud of that.