Firstly, I would like to apologise to those of you who took my advice and watched The Hunger Games. In brief, it did suck a bit, so if you’re still on the fence about watching it, do yourself a favour, just climb down to the side where you don’t watch it. Or wait for DVD if you really have to watch it.

Moving on to the The Avengers though. OMG. Have you watched it yet? In one word, epic. That is what The Avengers was, epic. I loved it from beginning to end. Joss Whedon really did the movie justice. So if you haven’t watched it yet, go do it already. Big thumbs up.

For May, there are two movies that I reckon will be worth it. There’s one more that I will probably watch, but already have a feeling it will suck a bit, that is Battleship. I’ll get to this one at the end…

First up is Dark Shadows, Tim Burton‘s latest film, based on the 60’s series of the same name. In 1752 wealthy playboy Barnabus Collins, played by Johnny Depp, breaks the heart of a witch, who turns him into a vampire and buries him. He gets freed accidentally in 1972 and returns to find his once magnificent mansion in ruin and occupied by his dysfunctional descendants, each with the own deep dark secrets. It features, yeah you’ve guessed it, Helena Bonham Carter, in the role of Elizabeth Collins Stoddard (Michelle Pfeiffer), the family matriarch’s hired live-in psychiatrist. 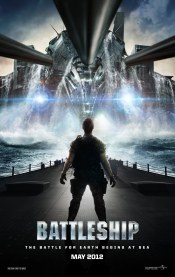 As mentioned earlier, the other movie which I will probably watch this month is Battleship. The movie is based on the Hasbro game, Battleship. To be honest, it looks a bit too much like Transformers with a different name but it’ll probably be good entertainment regardless of whether it is good or not though, so give it go if you’d like.